Your Guide to Water Treatment Trends in Santa Clara: Chlorine vs. Chloramine

More cities and municipalities around the country are switching their standard water treatment methods — from chlorine to chloramine. Especially in areas of the west where droughts are causing cities to scramble for imported water sources, the switch to chloramine, rather than chlorine, can be common. In this piece we’ll take a look at what you need to know about:

Chloramine is a chemical variant of chlorine that contains ammonia, and is generally safe to drink and use around the home in the same way traditional, chlorine-treated tap water would be.

Cities have commonly used both chlorine and chloramine chemicals to treat municipal drinking water since the early 1920s and 30s. Chlorine became widely used during World War I when ammonia shortages reduced the availability of chloramine.  As a result, chlorine remains common but chloramine is seeing increasing adoption, especially in densely populated areas.

Some populations, specifically individuals on dialysis treatment and those with respiratory issues, may be sensitive to chloramines. If you, or your family members fall into either of these categories, it’s a good idea to check with your local drinking water provider to see if a switch is coming to your area.  Chloramine is also harmful for fish and aquatic animals, so you’ll want to pay close attention if you’re used to supplementing your aquarium with tap water, or consider a chloramine filter.

Why is Chloramine Added to Water?

Water utilities typically use chloramine as a secondary disinfection method to ensure germs and other pathogens are removed from the water supply. It is most often used as a replacement for traditional chlorine, which can cause build up over time. Chlorine can also have a shorter effective period when it comes to water treatment, so in certain areas where water has to travel farther, chloramines can be more effective to ensure long-term water disinfection.

Municipalities may also choose to use chloramine rather than chlorine because it can often lead to fewer complaints about taste and smell.  Chloramine tends to have a less noticeable chlorine odor and taste while still protecting water safety and quality.

Chlorine vs Chloramine: Pros and Cons 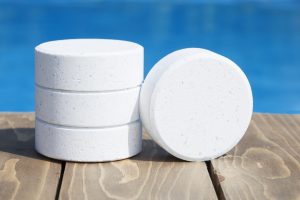 Conversely, chloramines can be more corrosive than chlorine-treated water on pipes, so cities need to be diligent about the stability of the water infrastructure when introducing chloramines. And as we know, chloramine can also be a problem for dialysis patients, those with certain respiratory issues, can’t be used in aquariums, and can even impact the results and tastes of baking.

It can be more difficult to determine if you have chloramines in your water than chlorine, simply because chlorine often comes with its distinct odor and taste.  If you’re unsure if there’s chloramine in your water however, you can check with your local utility provider, either online or by calling your local office.

The best way to determine if you have water treated with chloramines at your home, is always to have it tested. You can either purchase a water test kit at your local hardware store, or contact your local Culligan Man for a complimentary water test.

If you’re among those affected by the presence of chloramines in water — and even if you’re not — you may want to consider a water filter to have fresher, better quality water in your home. There are many water filters and variations of filters, so it’s important to choose one designed specifically to remove chemicals like chlorine and chloramine.

Reverse osmosis filtration systems are a good starting point, since RO technology can effectively target and remove these kinds of chemical compounds.

If you’re not sure where to start, or what type of filtration system may be right to help you remove chloramines from your water, you can always check with your local Culligan of Santa Clara.  He or she can help you better understand what’s in your water, and the best ways to remove it.